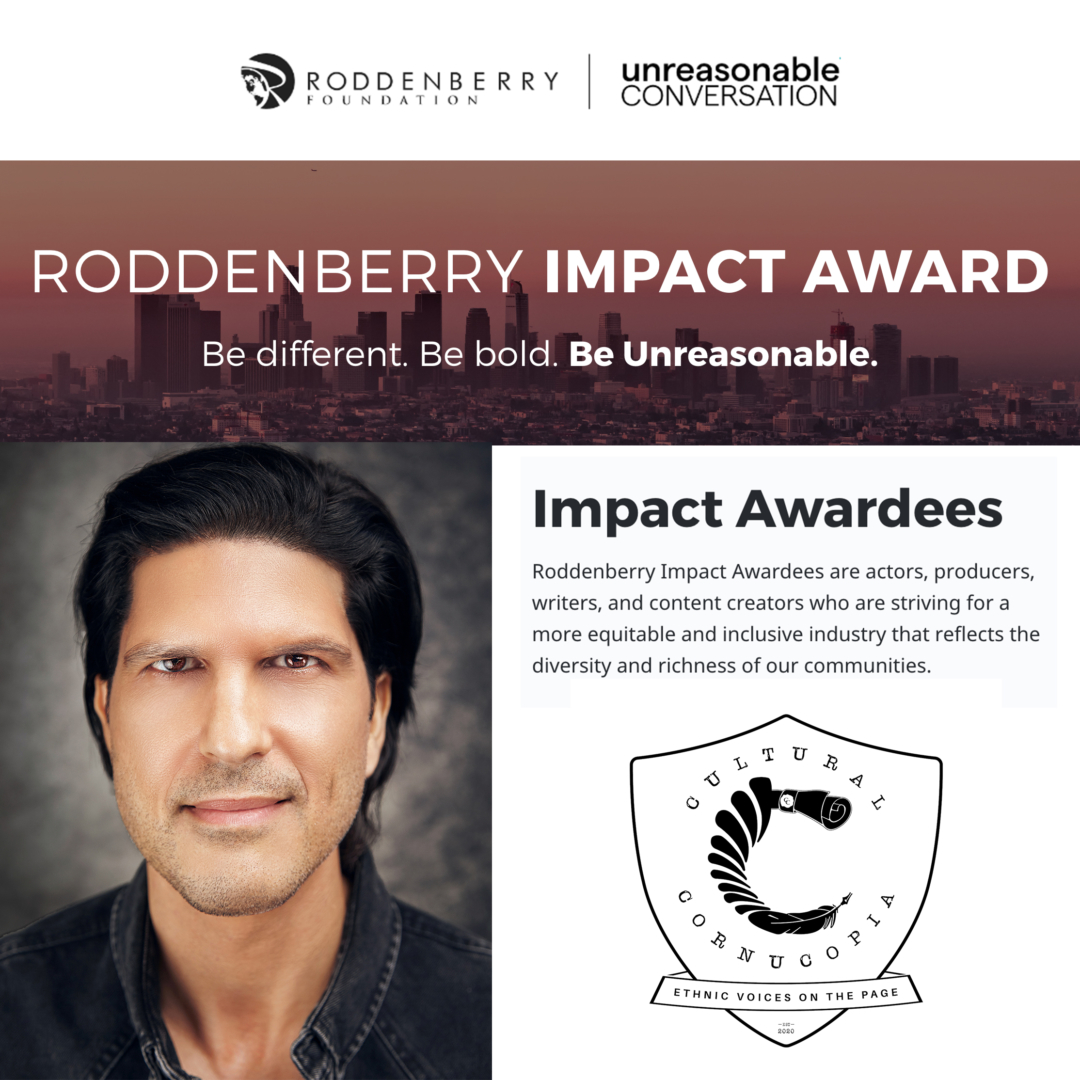 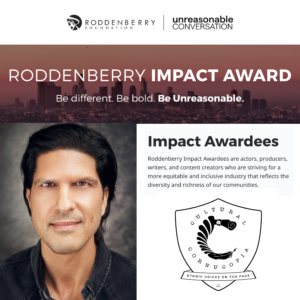 I’m very honored and excited to announce that I was chosen as a The Roddenberry Foundation Impact Award recipient this year!

To read more about the Impact Award, you can visit their website here:
https://roddenberryfoundation.org/unreasonableconversation/#impact-awardees

The grant from the Roddenberry Foundation will towards creating my new non-profit organization, “Cultural Cornucopia – Ethnic Voices on the Page”. I’ve got a basic website landing page up with links to social media: https://culturalcornucopia.org – Please follow the accounts to keep up with the organization as I put all the pieces together and get it going.

The organization will be a development platform for ethnically diverse, unproduced playwrights to get their full length stage plays off the ground 🎭  More details will be released in the near future.

I want to share how this all came down, especially during these extraordinary, tumultuous ties. So, I applied to the foundation’s website just before their deadline several months ago. I received an email a few weeks ago about being selected, just as the civil unrest and protests went into full swing. I was speechless at the confluence of it all. It’s a first step towards my push to change the system from the inside by supporting ethnically diverse storytellers. If true diversity and inclusion are going to make it onto our screens, stages, and pages, we need to champion diverse writers and creators. This is what Cultural Cornucopia intends to do.

Why did I decide to do this?

As a first generation American actor and writer of mixed ethnicity, the lack of cultural representation throughout all facets of the entertainment industry is something that has irked me since I was a child. Rarely, if ever, seeing stories and characters that related directly to me and my diverse friends created a dissonance within me that I still struggle to reconcile. Especially when those rare appearances were stereotypes, or worse, complete misrepresentation playing into prejudices of a myopic perspective.

I’ve been racially profiled on many occasions, which I believe is a result of ignorance largely due to this lack of cultural spectrum in media. The only way to combat this is to have more diverse voices creating content and telling stories. The America of today and beyond is a cornucopia of cultures and ethnicities and we’re way overdue for our entertainment to accurately reflect this wonderful array of diversity.

Both my parents were immigrants, in an interracial marriage. With my odd couple parents in the 1980s steering me through the trials and tribulations of childhood in the American midwest where I grew up, I often felt alienated. There was no outlet where I could truly escape to that related to me in a cathartic way in terms of film, tv, theatre. I eventually rejected my heritage for many years. I tried so hard to “fit in” by assimilating as much as I could. I would show them I could be one of the good ‘ole boy Americans, despite my unconventional pedigree.

Little did I know back then that my diversity was actually my greatest strength. It took me awhile to realize this, but I’m here now and I’m so passionate about telling stories from my particular background as well as encouraging and cultivating other culturally diverse stories.

This is my “Be The Change” skin in the game. What’s yours? Let’s get a conversation going about how we can contribute to #diversity, especially in media/entertainment. Feel free to comment on this post or any of the social media account posts. 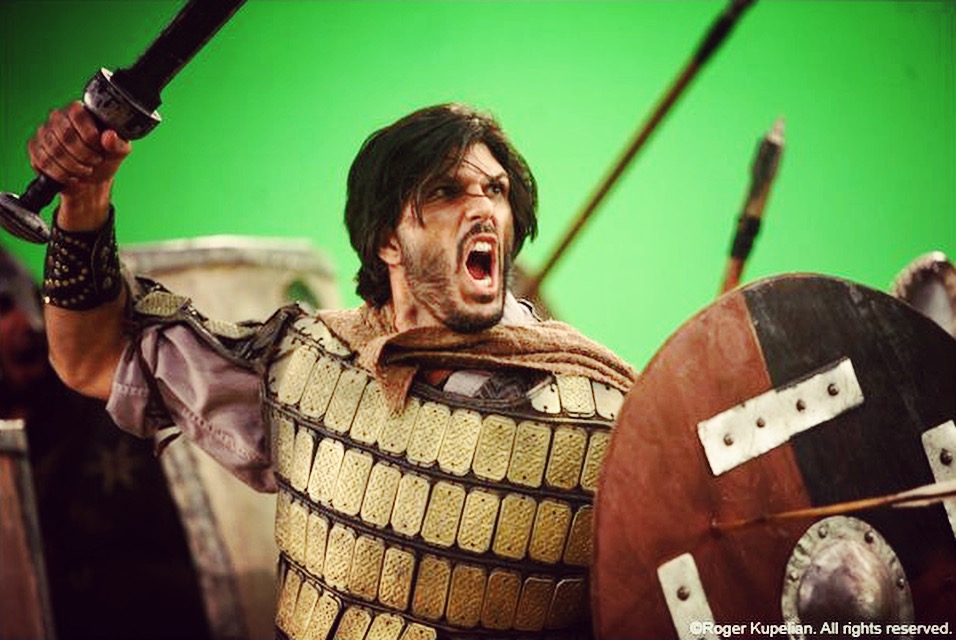 Growing up in quintessential Midwestern America as a child of ethnically diverse immigrants I would often get asked where I’m from. Being 1st generation mixed ethnicity American, I was always aware that I was being perceived as “different”, so it was never much of a surprise. “St. Louis, Missouri!” I would proudly answer, to which they’d inevitably follow up with, “No, but where are you really from?” I quickly learned this was code for, “What is your ethnicity?” It’s something I eventually embraced by illuminating my unique ancestry with pride while attributing the persistent probes to curiosity and not solely because of the color of my skin or atypical appearance, despite having had run-ins with racial discrimination throughout my life.

When I decided to live my dream of becoming an actor and moved to LA in the mid-2000s, I found myself digging through casting breakdowns attempting to see what roles I could fit. I’d frequently come across the term “All-American” and would think to myself, “I’m from the Midwest and 100% American!“ and enthusiastically submit for it. It wasn’t until I went to a casting workshop at the Screen Actor’s Guild a few years later that I learned it meant: white dude, usually with blonde hair, blue eyes, grew up near a cornfield.

To me, “All-American” meant the cornucopia of beautiful shades of people mixed with the melting pot of cultures they come from.

This 1950s era idea of ‘Leave it to Beaver’ America is something I didn’t think resonated or existed anymore, yet that outdated go-to terminology persists as standard in the entertainment industry decades later.

Next were the many meetings with potential representation and career consultations with agents and managers. Some would comment on my exotic look and how that’s “IN” or “NOT IN” at various moments. Others would say I have a great “leading man” look and vibe, but I’m “TOO ETHNIC” to play a leading man and not “charactery” enough to play the available ethnic roles.

My very existence did not fit whatever stereotype the entertainment industry had deemed fashionable at the moment for “ethnic types”.

With determination, I brushed it off as much as I could and moved onward by honing my skills, cultivating my own and seeking out interesting, culturally diverse projects.

When people try to guess my ethnic background, most guess Native American. Others guess South American, Italian, Persian, South Asian, Eastern European, Gypsy, and I’ve even gotten Inuit a few times. “You’re so lucky, you can play almost anything!” my lovely supportive thespian friends would encourage. And they’re right, I can basically morph into quite a few ethnicities, meaning a ton of diverse characters to play, including American. It’s exhilarating to research characters from vastly varied backgrounds and immerse myself into those cultures.

I guess that’s the great part of being “Ethnically Ambiguous”, the latest coined term the industry has bestowed upon the uncategorizable.

I’ve indeed portrayed Native American warriors, Persian generals, Jesus, Moses, Egyptian Pharaohs, Argentinian, Italian, Croatian, French, Georgian, Armenian, East Indian, the list goes on and yes, I’ve also played various American roles of assorted backgrounds. And while I’m very grateful to have worked on every one of those projects, very few of these roles have been on mainstream network television and studio films – it’s mostly been independent projects by filmmakers who have stepped outside the box with progressive, open minded, creative casting.

With recent movements and awareness focusing on diversity in the entertainment industry, such as “Oscars so White” and the blowback on several failed blockbuster films that have been guilty of the long running Hollywood whitewashing epidemic, the landscape is changing. While we still have a ways to go, progress is important to acknowledge and it seems we are on the precipice of a paradigm shift in terms of diversity. I’m quite hopeful for the future, and believe we can and will get there, but it will require action on all fronts.

The best way for film and television to become a better representation of the population is for diverse storytellers to work their way into the inner workings of content creation and get their culturally diverse stories told.

The Anglo-based and “white savior” tales have been recycled so many times that society is starving for fresh, thought-provoking, cultural content and the numbers certainly prove it. Charles D. King and his nascent company MACRO are trailblazing this movement. He and his team are living proof that it is up to us to make it happen. Writers, directors, producers making conscious, concerted efforts to diversify stories that actually represent what our modern world looks like and is interested in. It’s why I delved into filmmaking and writing and have several stories in development in various formats.

Ultimately, the ideal would be that we get to a place where actors are not cast in roles based on filling ethnicity checkboxes, but rather based on their capability to inhabit the essence of the role. This, of course, excludes projects such as historical, biopic, etc., where the ethnicity may require a specific verisimilitude.

The point is, true color blind casting focuses on the spirit of the character the actor creates, not the color of their skin or their bone structure and not cross checking a played out list of stereotypes. Hopefully future generations will enjoy that level of ubiquitous open-mindedness.

I’m optimistic that we are moving towards a more conscious, aware environment with women empowerment and diversity on all levels of the spectrum. But more importantly, the cascading effect it will have on culture and humanity as a whole is even more paramount as we move towards acceptance, tolerance, and inclusivity in our globalized melting pot.

Storytelling played such a fundamental role in humankind’s evolution into civilization that it’s up to us storytellers to get this right for the sake of the future.

Getting silly with each other on #sundaynight. #Re

Our #Saturday #artproject for the kids. It’s sup

Actual video of me and one of our mini-humans for

I love bonding time with our little man (and our m

#HappyFathersDay to all the dads (and single moms)

SO excited and honored to announce that I was chos